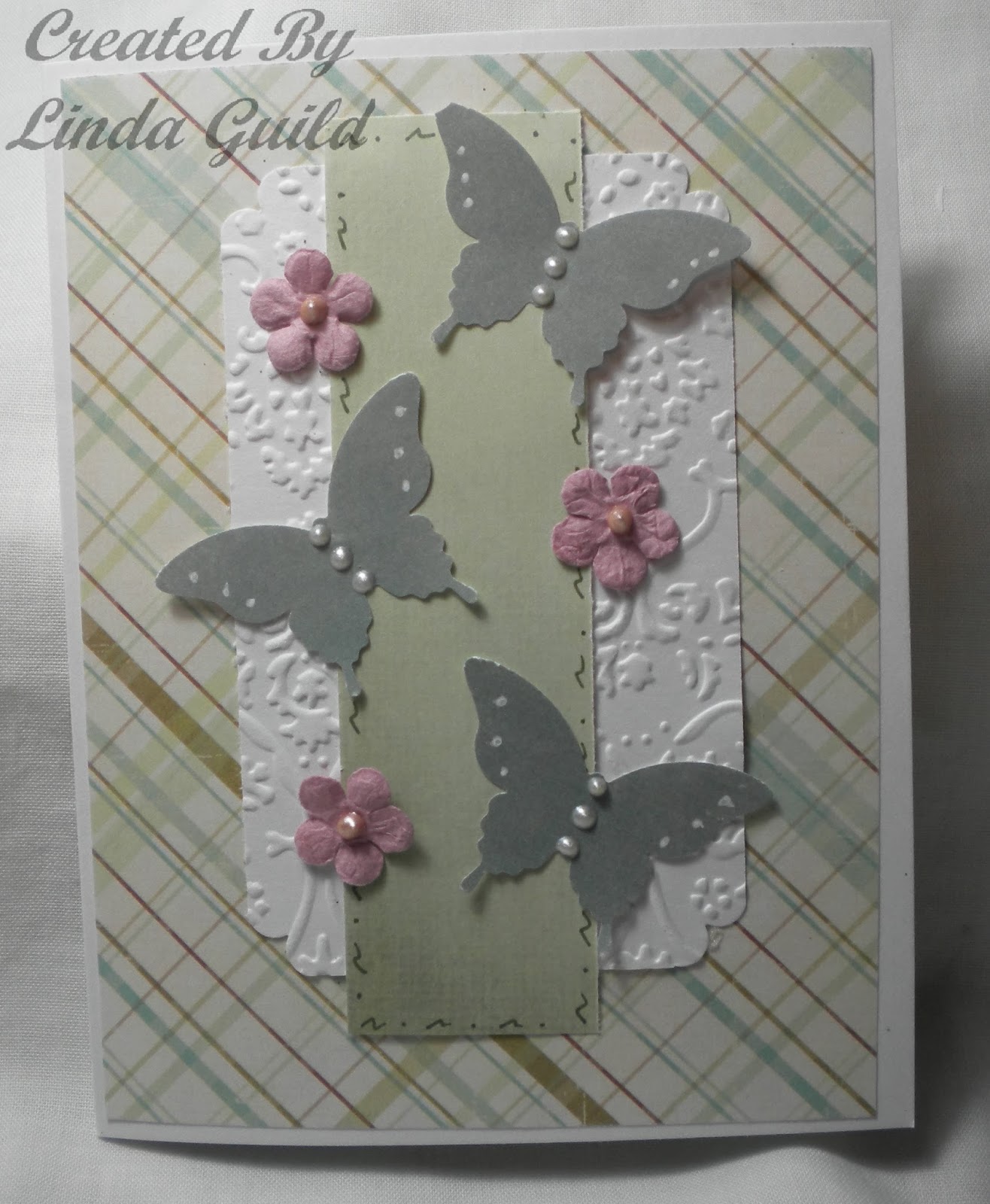 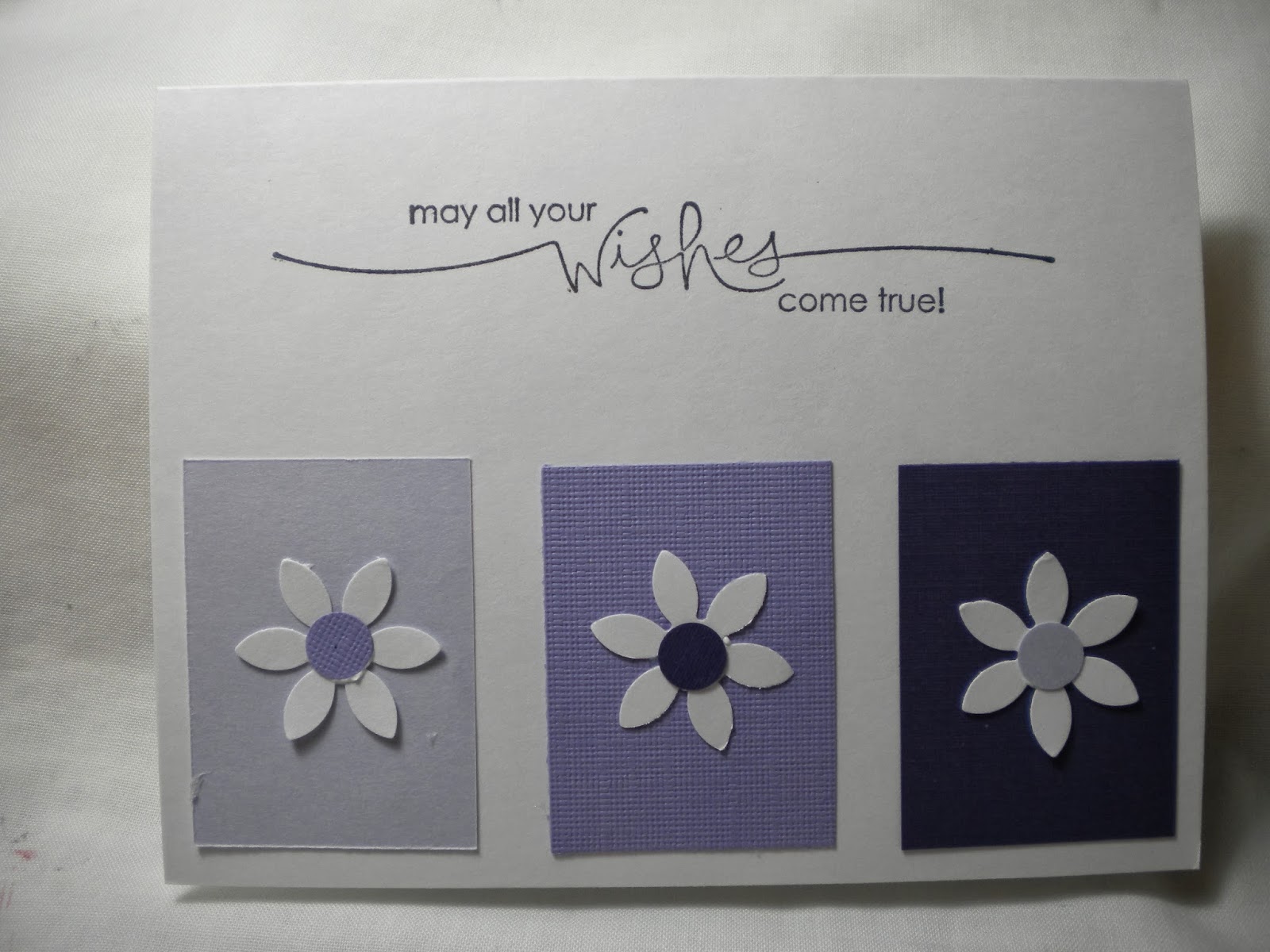 What could be more perfect than letting someone know you love them more than bacon?  LOL! 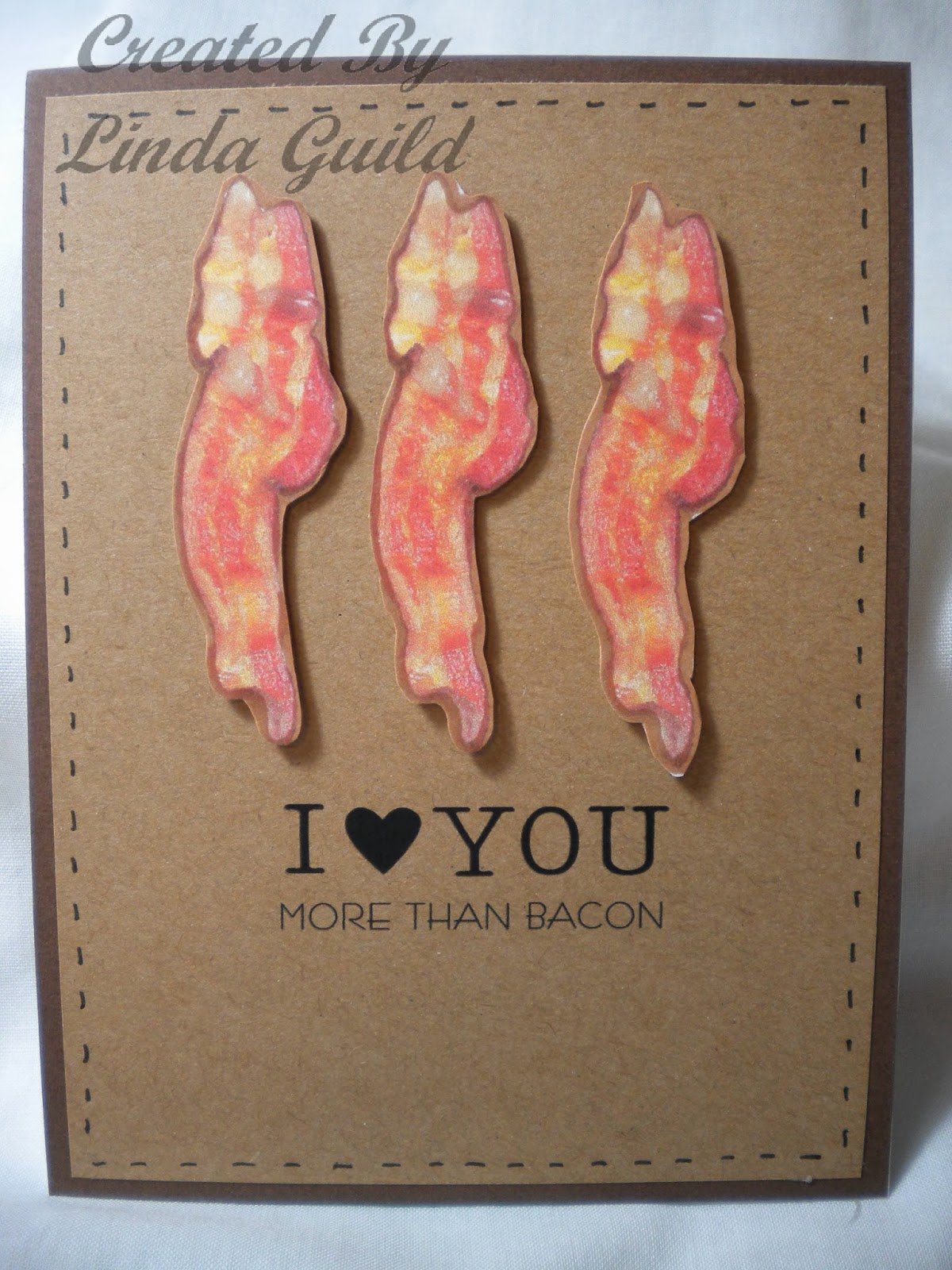 Inspired by a card seen online, the bacon images are clip art that I printed, shadowed and cut out by hand.  They're pop dotted on the card front.

The sentiment was printed in Hallmark card making software.  I added some pen work on the outside edge.

Email ThisBlogThis!Share to TwitterShare to FacebookShare to Pinterest
Labels: bacon, I love you card, Valentine card 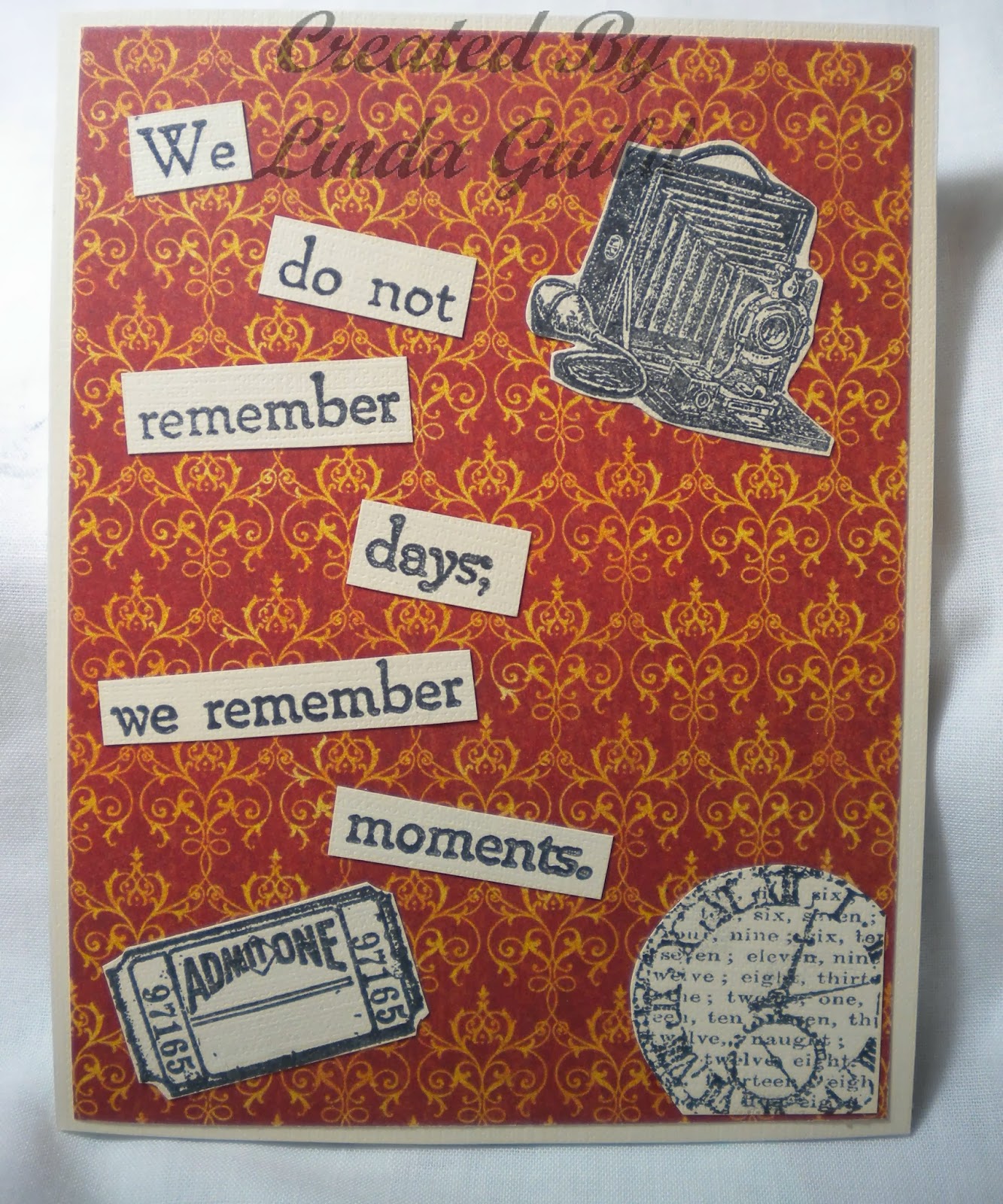 I used stamps from three different sets for the collage elements. The colors on the first one didn't turn out the way I had the card in my mind so I chose a darker background and made a second version. 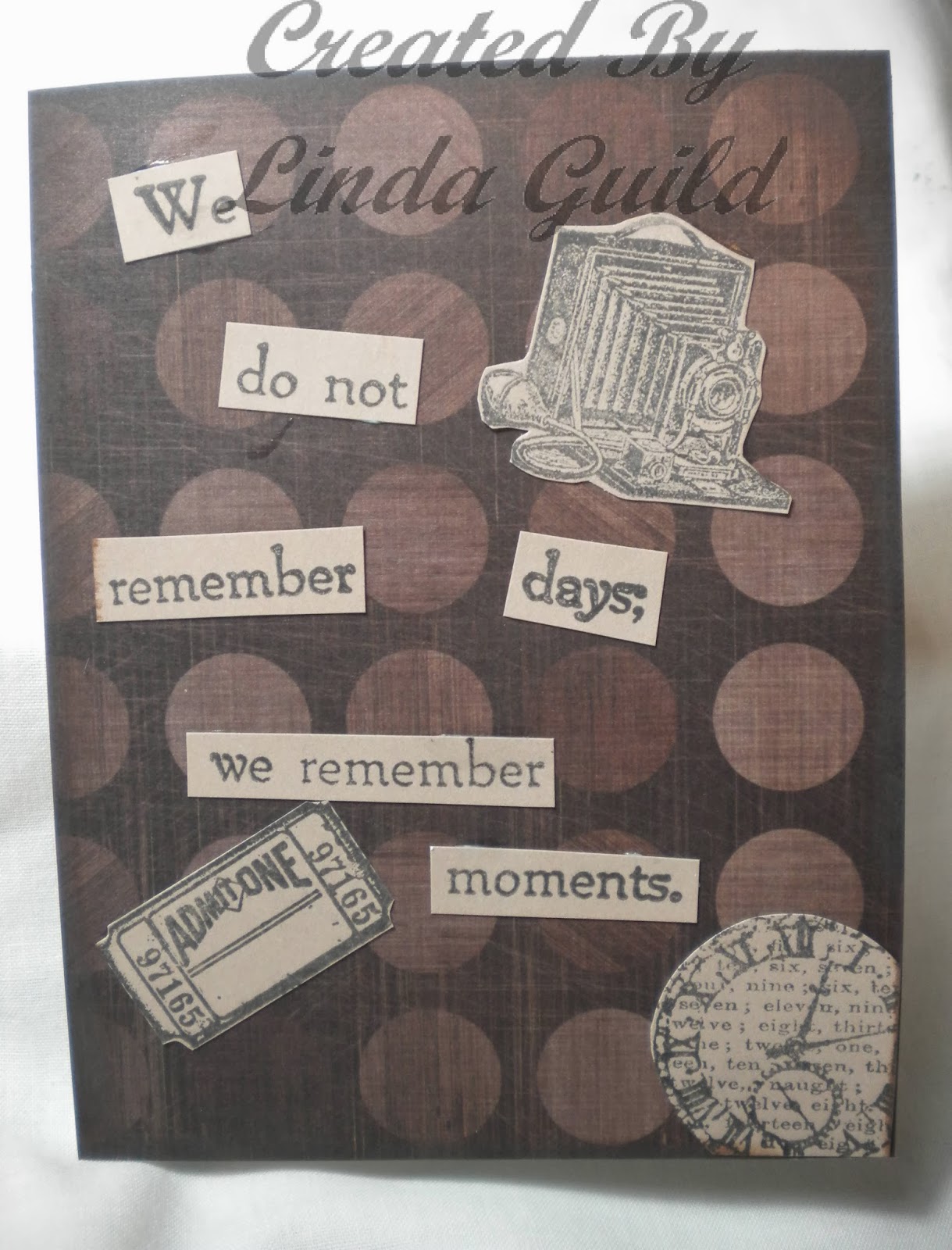 I designed and printed the sentiment and the clip art image of the lock and key onto printed cardstock using Hallmark card making software.  Then I reprinted the lock and key, cut them out and pop dotted them over the printed image. 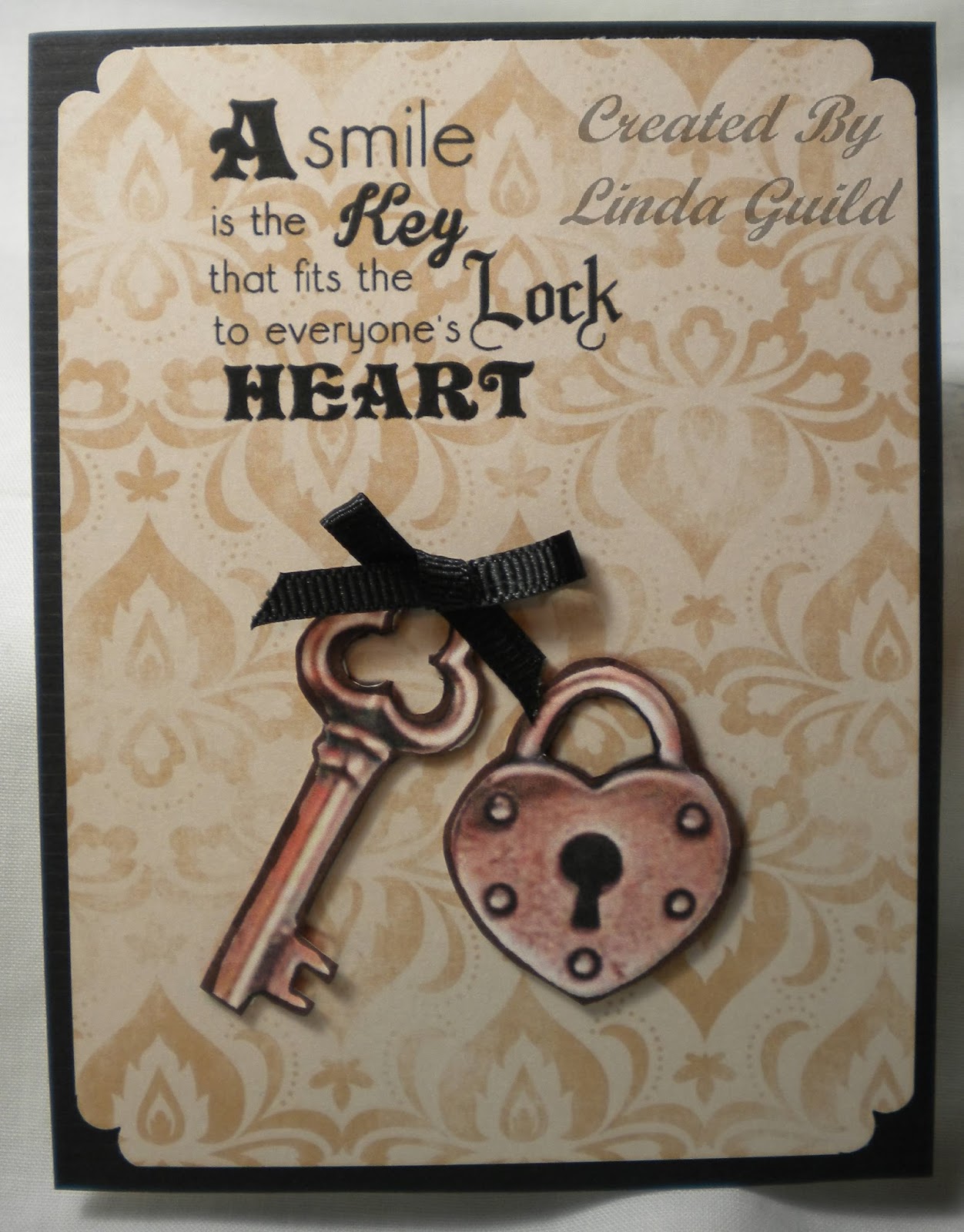 ASL "I Love You" Card

The ASL sign for "I love you" is one of the first ones my granddaughter learned.  Even Cooper, who's just 2 1/2 will flash the sign to us as he's leaving.

Today I got the idea for this card and searched for a clip art image of a hand in this position with no success.  This came from the Silhouette store, I purchased it then traced it in Make The Cut software and added a shadow for dimension.  The original file didn't have a shadow and was just too flat looking. 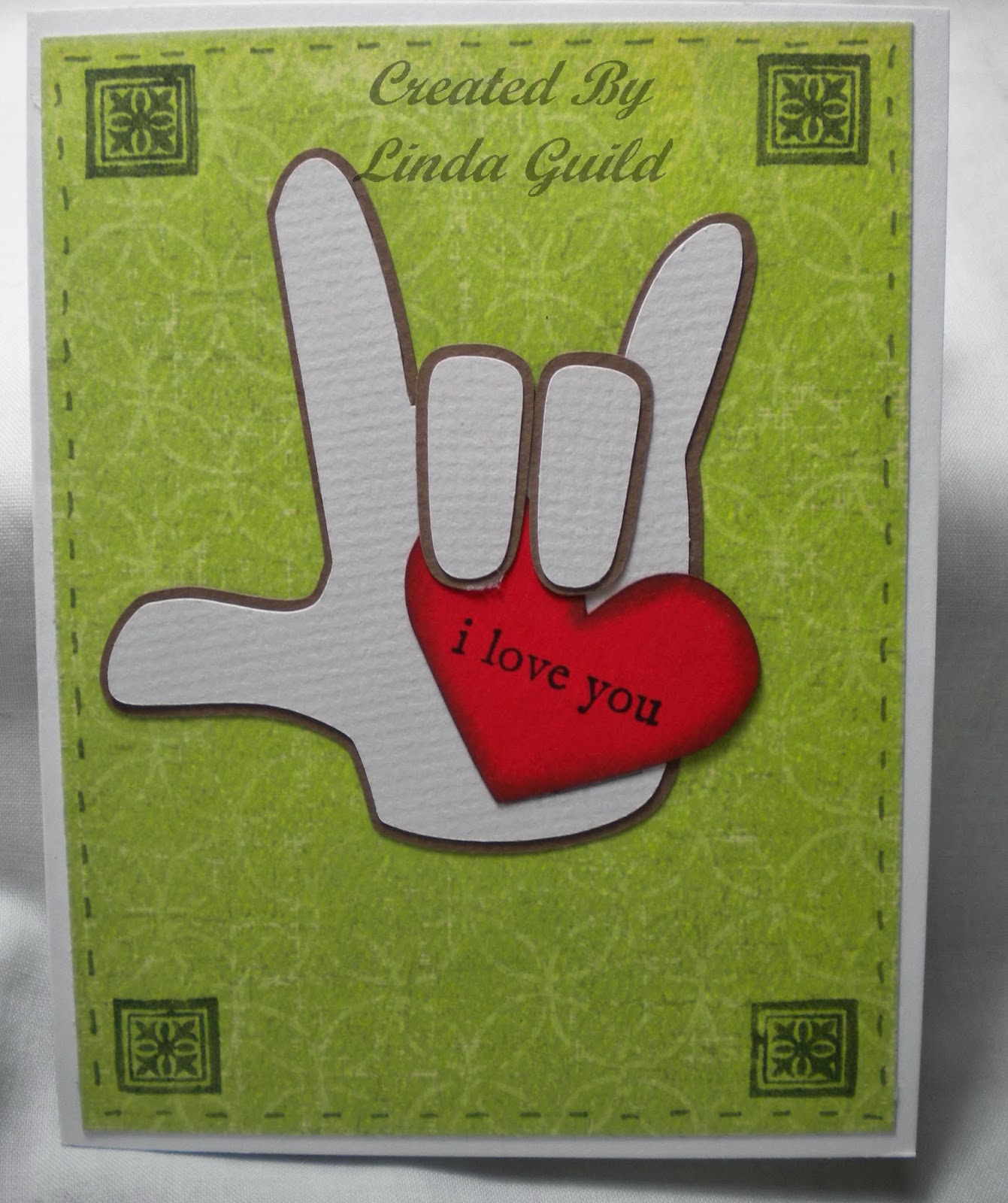 Email ThisBlogThis!Share to TwitterShare to FacebookShare to Pinterest
Labels: I love you card 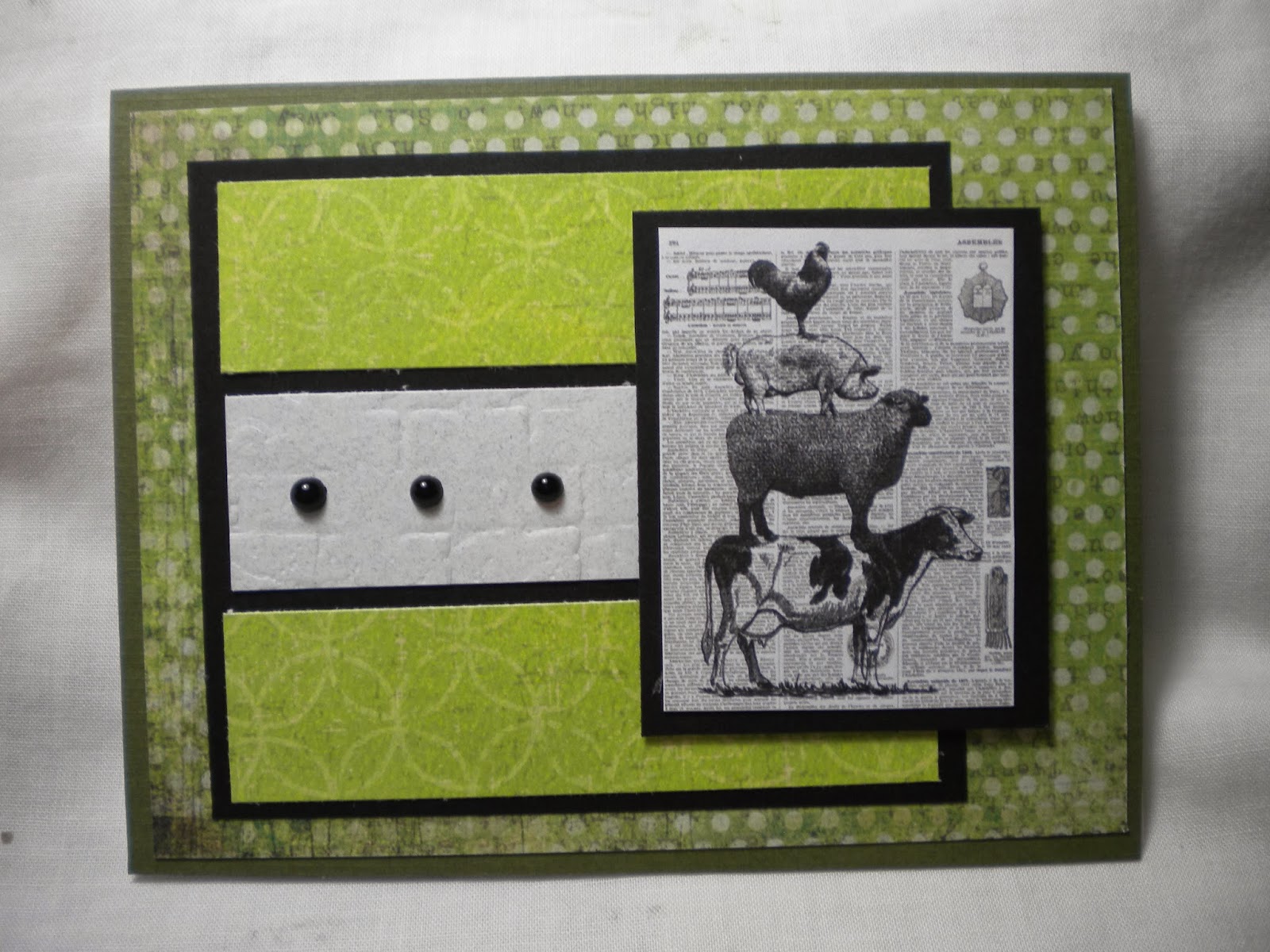 I used a clip art image and added some Pearl Pen dots.  The lighter colored strip was embossed with a Cuttlebug folder.

Email ThisBlogThis!Share to TwitterShare to FacebookShare to Pinterest
Labels: Card Gallery - Blank inside 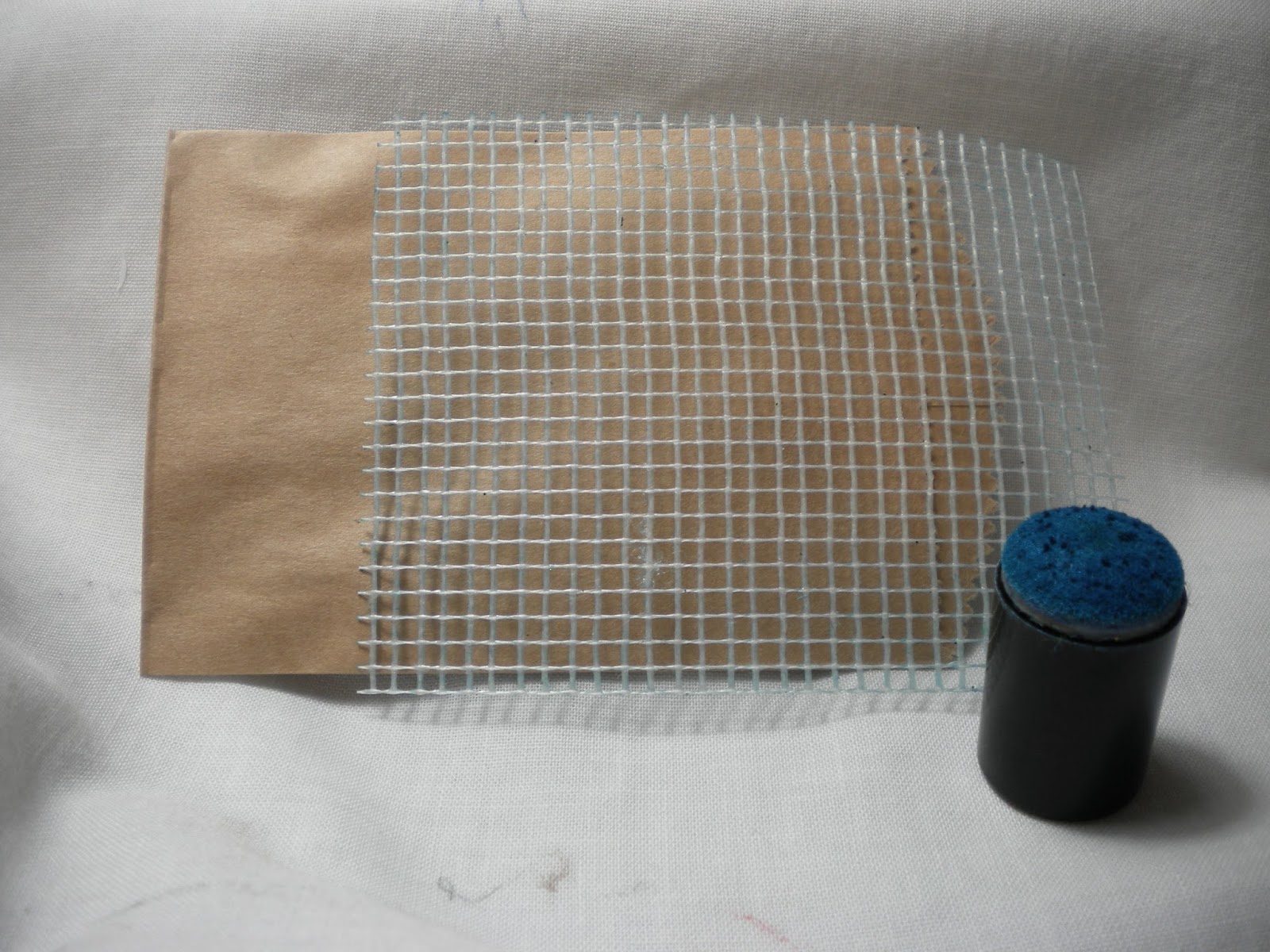 Here are the supplies I used.  Mini kraft envelopes from Hobby Lobby, a piece of drywall mesh cut to fit the envelope front, a dauber and Broken China distress ink by Tim Holtz.

I pressed the drywall mesh onto a t-shirt to remove some of the adhesive.  Then I applied it onto the envelope and inked the outside edges. The grid work of the mesh gave a nice pattern. 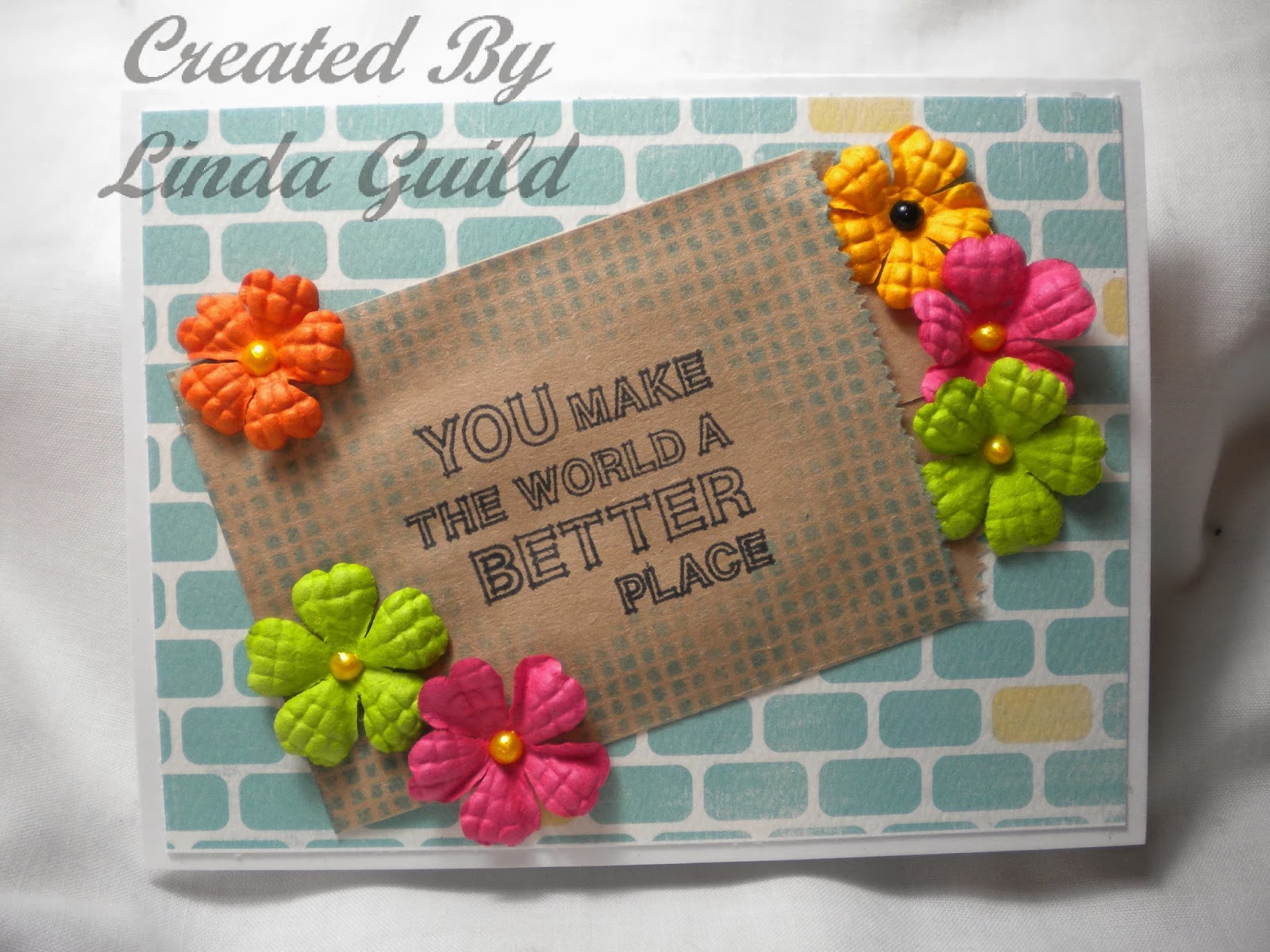 The sentiment is from CTMH Live Out Loud stamp set.  The flowers are Prima with Pearl Pen dots for the centers.
Posted by Linda at 3:12 PM 1 comment:

This is a technique explained to me by a Stampin' Up demonstrator.  You ink masking tape, then apply it onto paper and gently peel it off.  The texture of the tape makes a nice image.

For this card, I cut a piece of 3 1/4" x 5" white cardstock, and inked 1" wide masking tape with three colors of ink.  Black embossing powder makes the sentiment stand out.  The tree image is from SU's Lovely as a Tree stamp set. 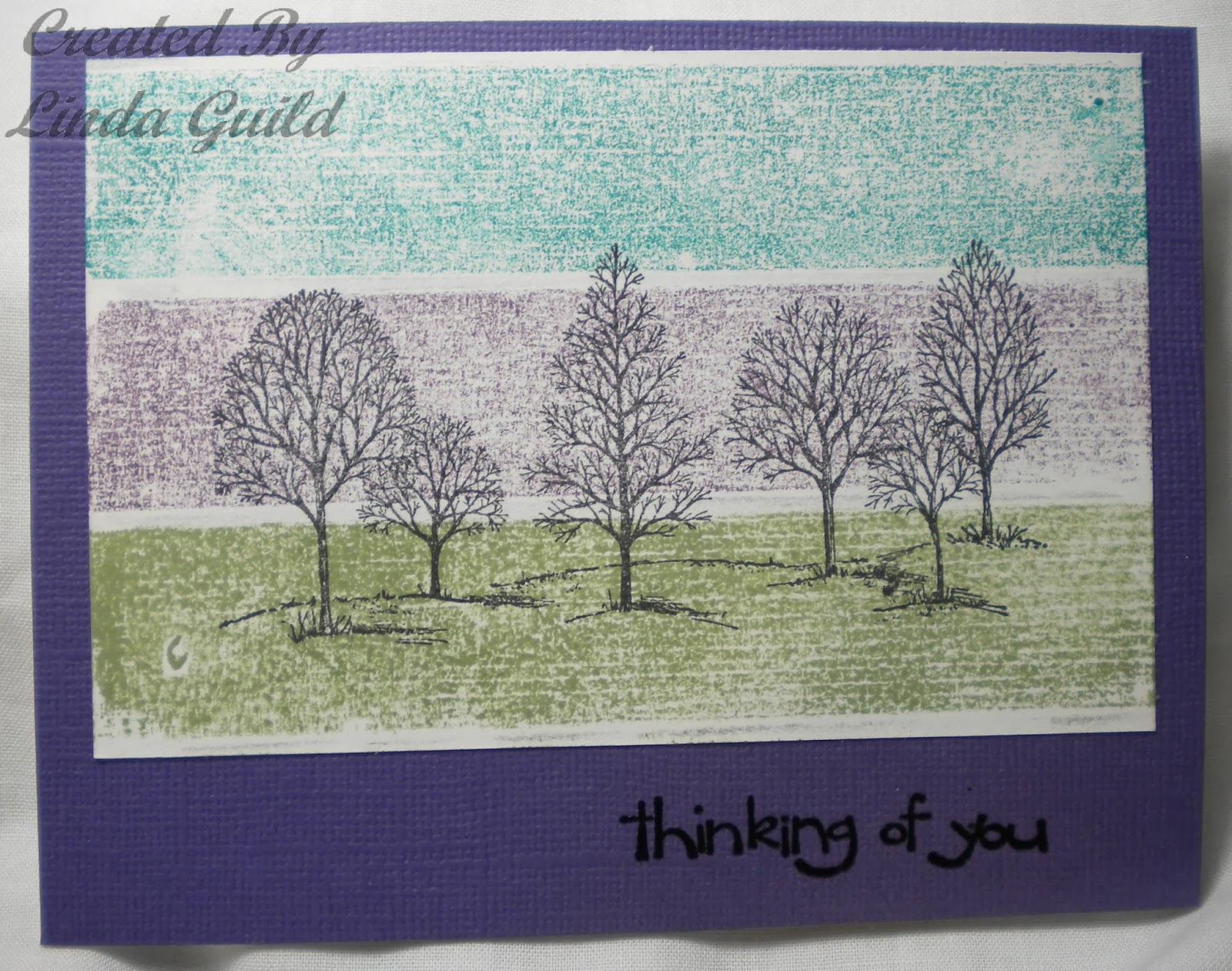 I like the texture of the background from the masking tape.  Now I just need to figure out a good way to ink the tape without inking all my fingers too!

Email ThisBlogThis!Share to TwitterShare to FacebookShare to Pinterest
Labels: Lovely as a Tree, Masking tape technique, Thinking of you

I found a clip art image of a Lego heart and imported it into MTC to cut it out to resemble a pixelated heart.  The heart was embossed with a Cuttlebug folder.
The sentiment was printed in Hallmark card software using Courier New font.
This was inspired by a card seen online.  The caption under the card was "taking the time to do more than text is a real treasure".  Very appropriate these days! 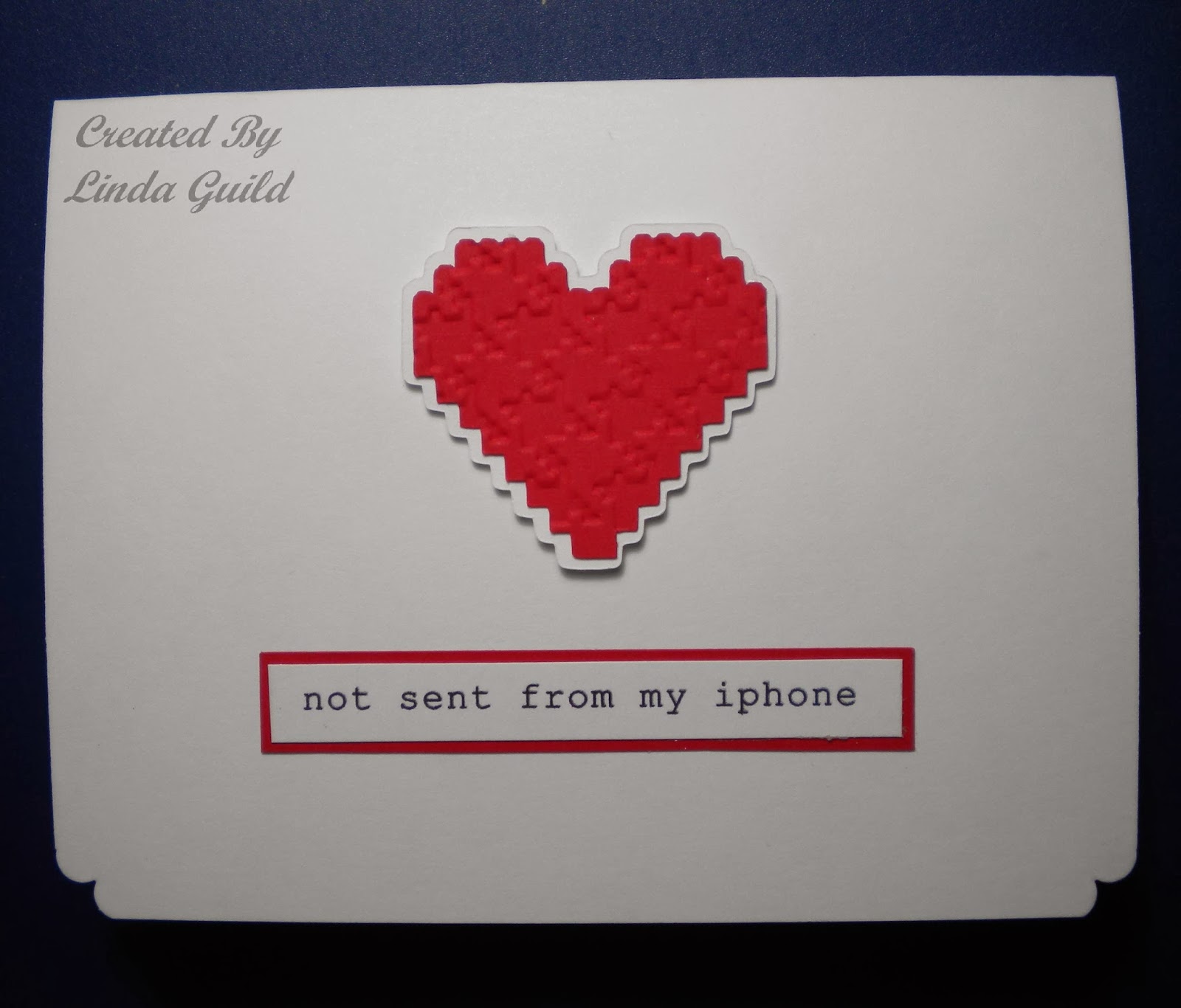 Since the pieces on the card front are only 1 1/4" wide, this card is a good way to use up your narrow scraps of printed paper.

The sentiment is from a CTMH stamp of the month set, Sweet Life; the apple is from Preserves cartridge.  I tweaked it some and cut it in MTC software.  The edges of the apple and leaf are shadowed with Chestnut Roan ink and I added a white highlight on the apple with a gel pen. The red dots on the stamped center piece were done with a Promarker.

These pieces can be arranged so that you have 1/8" of the card base showing through.  Start in one corner, place your first piece so that there's 1/8" of the base showing on the outer edge and the other three pieces will fit perfectly.

Then stamp your sentiment and place the center piece. 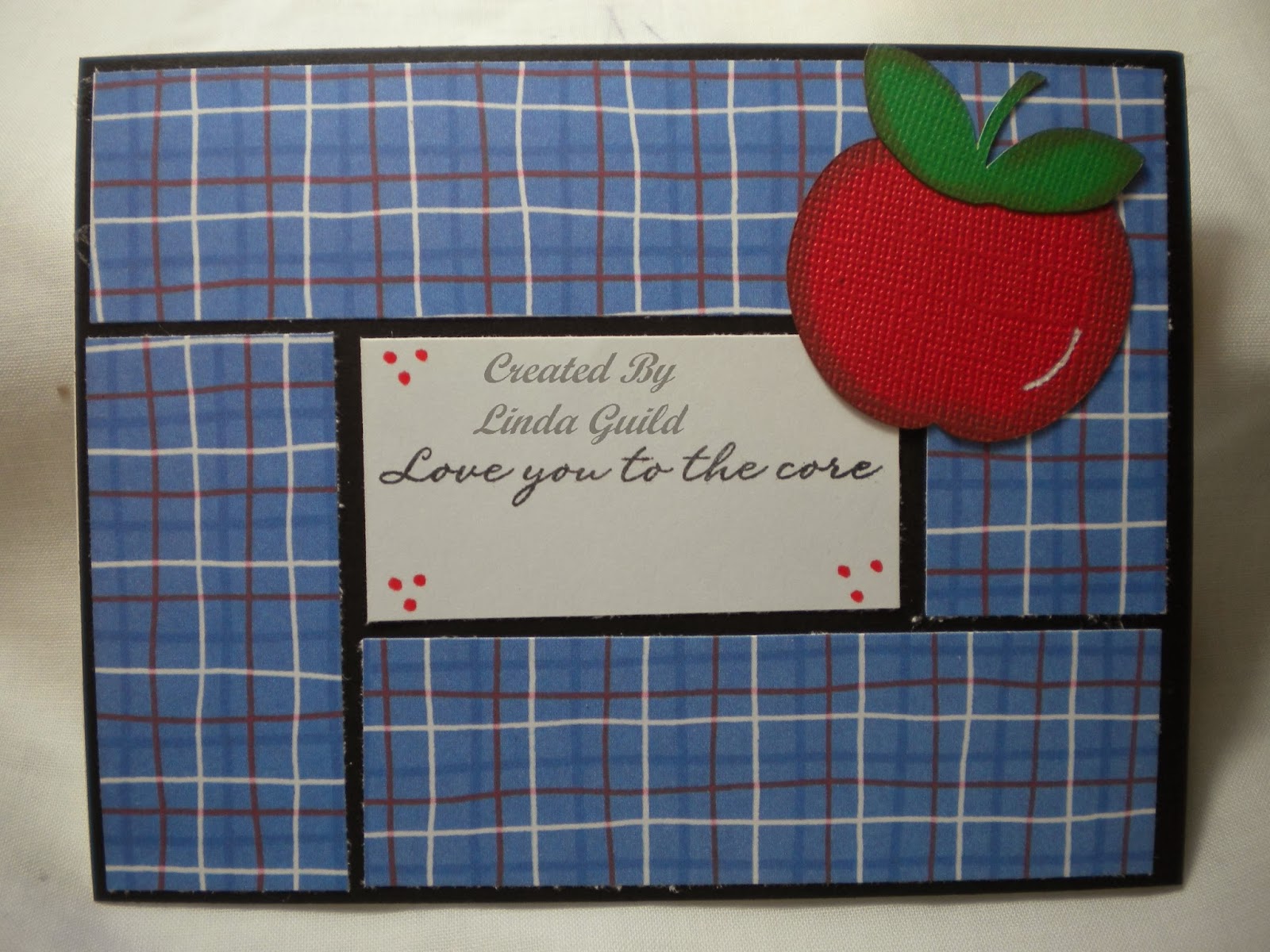 Wish I could say this was my original idea, but, it's not.  I saw something similar on a Facebook page and adapted Toni Arthur's idea for a frame I had on hand.

Our local Dollar General Store had these framed pieces of "art" for only $6.00.  I liked the scroll work in the corners and since the frame sits about 3/4" from the picture, I took it apart and treated it as a shadowbox. 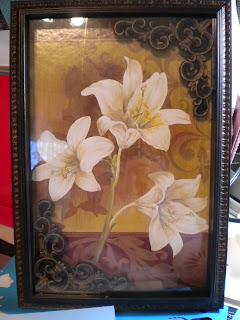 I covered the art work with a piece of pretty Tim Holtz paper using my ATG gun and double sided tape.  The branch was clipped from a tree in our front yard.  It had to be trimmed a bit to position it just where I wanted it inside the frame. 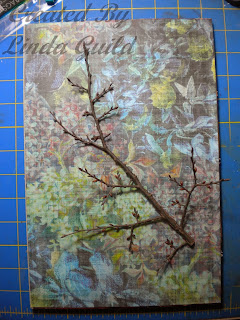 Once I was happy with where it was situated, I used an awl and punched a hole on either side of the branch and threaded some paddle wire through the holes to secure the branch in place. 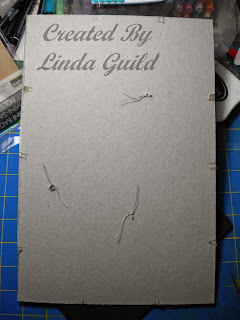 Twisting the wire on the back to keep it in place made me remember all those toys the grandkids opened at Christmas.  One year, it took at least 10 minutes to get a Barbie doll and all her accessories off the cardboard backing---while an excited 5 year old was bouncing up and down in anticipation of playing with it! 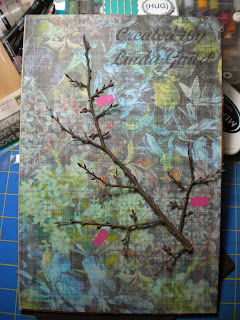 The pink pieces of paper indicate where the wires were attached. 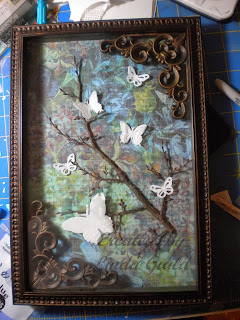 The butterflies were punched from vellum and mounted on a matching punch out of white cardstock. I used some glue dots and some pop up glue dots to attache the white cardstock punchouts onto the background and vellum adhesive on the overlays.   The wires were covered by three of the butterflies.

I used a Cuttlebug die and folder, Martha Stewart punch and an EK Success punch for the butterflies..

This was made for my main bathroom but I have a feeling when my friend, Leonna, sees it, she'll wind up owning it.  She loves butterflies more than I do!

A Stampin' Up demonstrator pinned a card similar to this on Pinterest.  I like the sentiment she used so I printed it in my card making software.  Then I added a couple of flowers punched with an EK Success punch and a pretty brad from Eyelet Outlet. 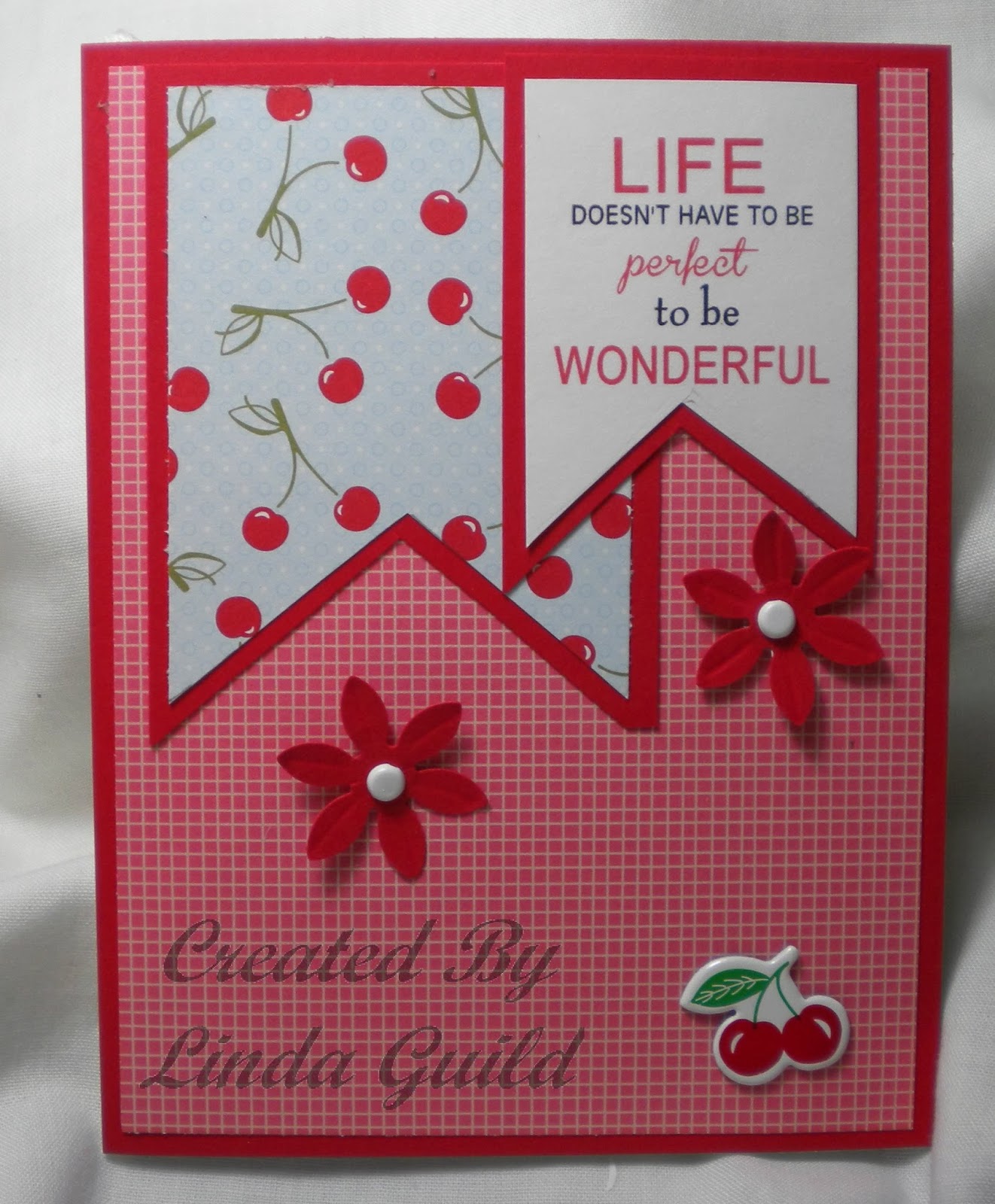 I believe I prefer the second version better.  No flowers and I dropped one of the pennant shapes down a little lower. 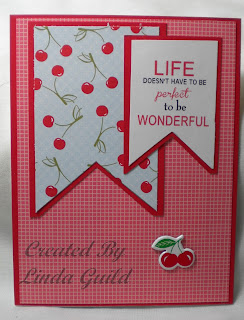 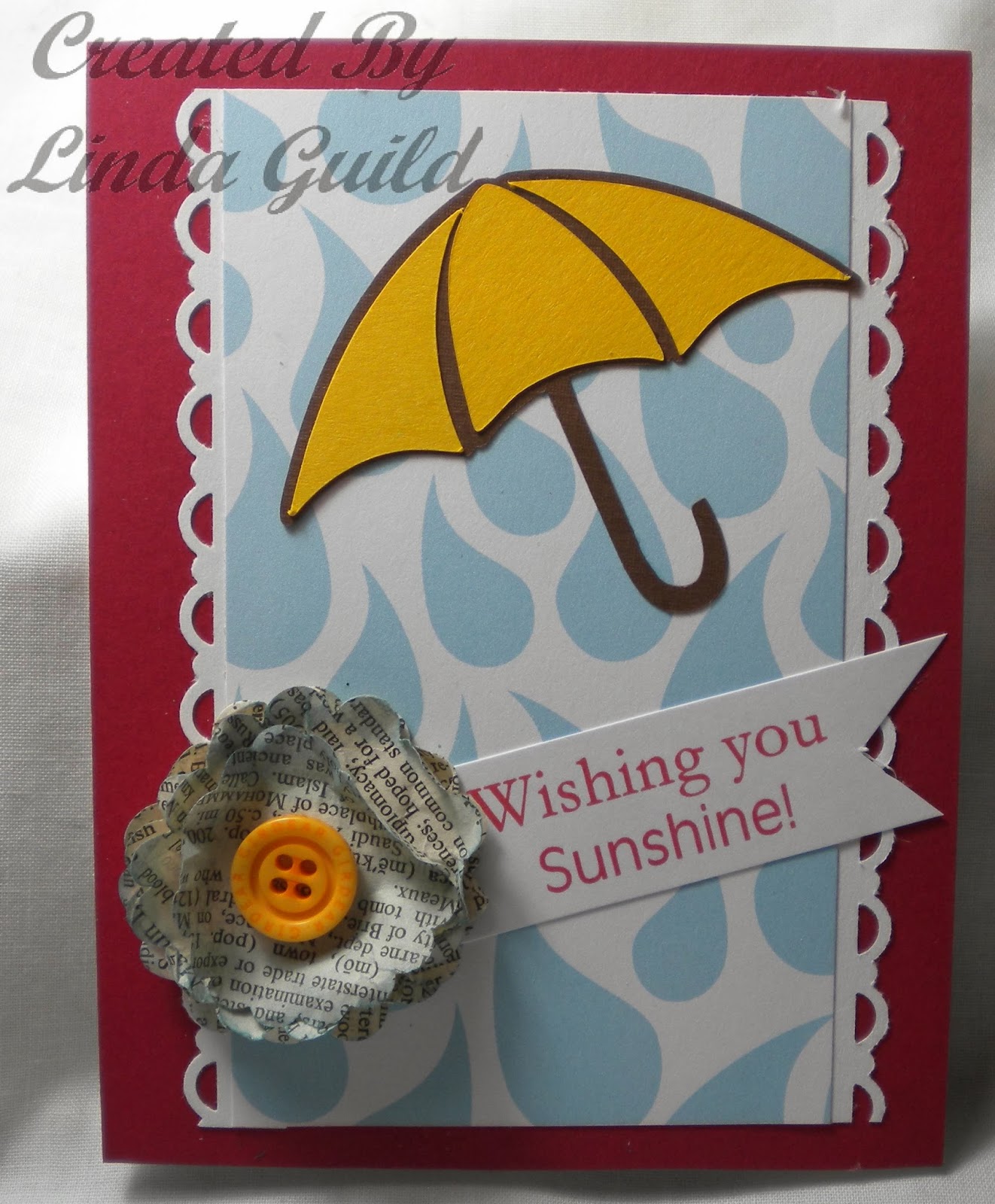 The umbrella is a piece of free clip art that I imported and cut in Make The Cut software.  The flower is made from layers of scalloped circles punched from an old book page.

Renee Wayland and her sweet sister drove to Ada and Shirley and I introduced them to our favorite LSS, Scraptopia.  While we were shopping, I noticed a roll of printed tissue paper by Tim Holtz.  The roll was huge so Renee and I divided it.  I used the tissue paper for the background on this card.

The original card is from Miriam's blog Cards and Scrapping.  She's a Stampin' Up demonstrator from another country and I can't read a single word of her posts! lol!

I've been using my Cameo for almost a year and today's the first time I've had any issues with it.  Guess it doesn't like inactivity and resented not being used for over six weeks.  I had a 12 x 12' sheet of cardstock on my mat and it decided to only cut half the images.  After messing around with the blade, etc. for several minutes I gave up and put a new blade in and it's cutting just fine now. 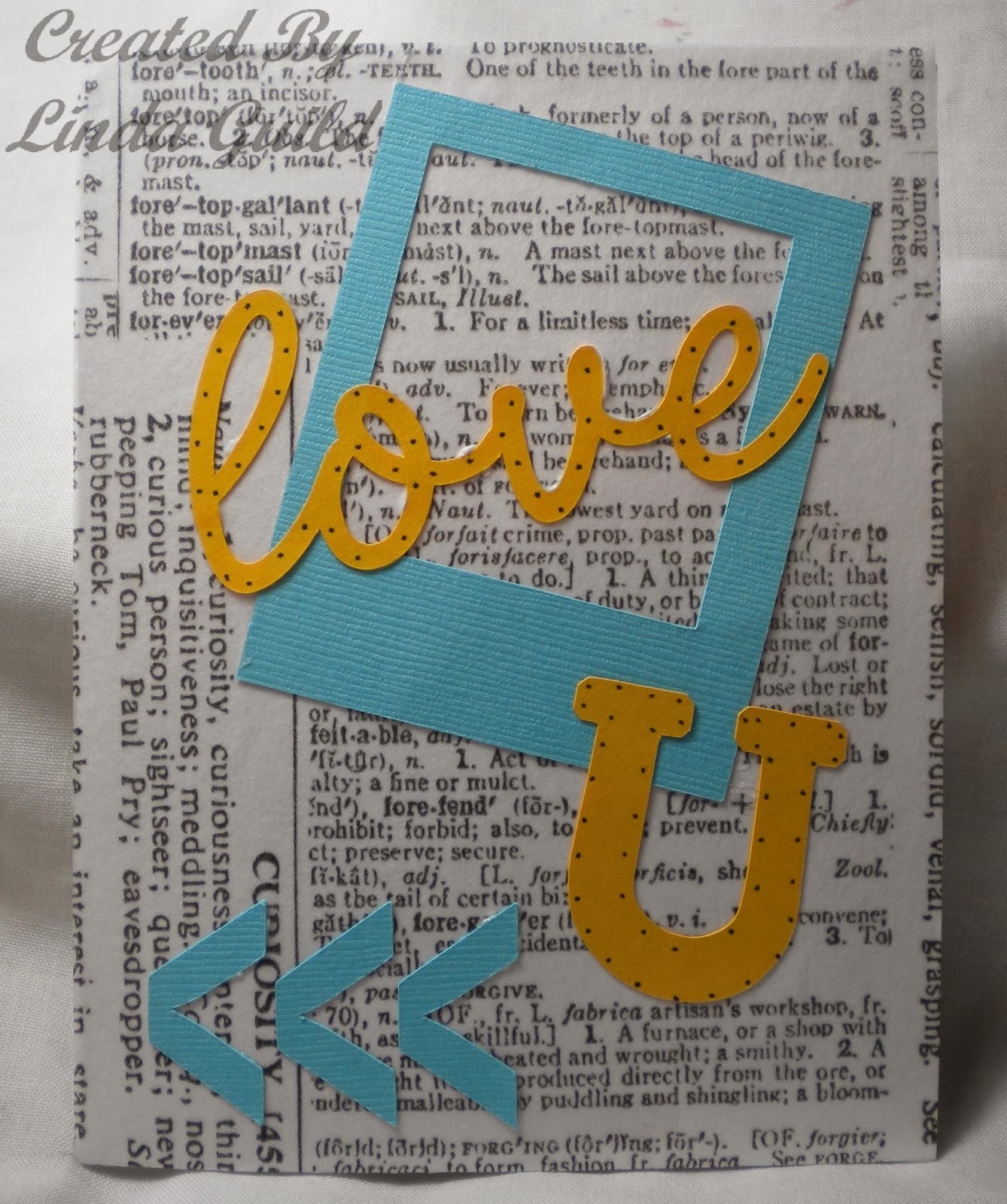 Email ThisBlogThis!Share to TwitterShare to FacebookShare to Pinterest
Labels: Love U Card

It's Been A Long Month!

There is a very good reason why nothing has been posted on here since my automated posts on Christmas Eve.  And, they wouldn't have posted if I hadn't set them up several weeks ahead.  My husband had a serious fall on December 10th and just got home from the hospital and rehab yesterday.

I spent the last month driving back and forth to Midwest City to the skilled nursing facility where he received his physical therapy.  It seems like I met myself coming and going.  There was no time or energy to make any cards at all.

He's doing quite well so I sneaked back into my craft room to make a thank you note for the staff at the care facility.  Guess card making is like riding a bicycle.  It was a slow start but I managed to get this done. 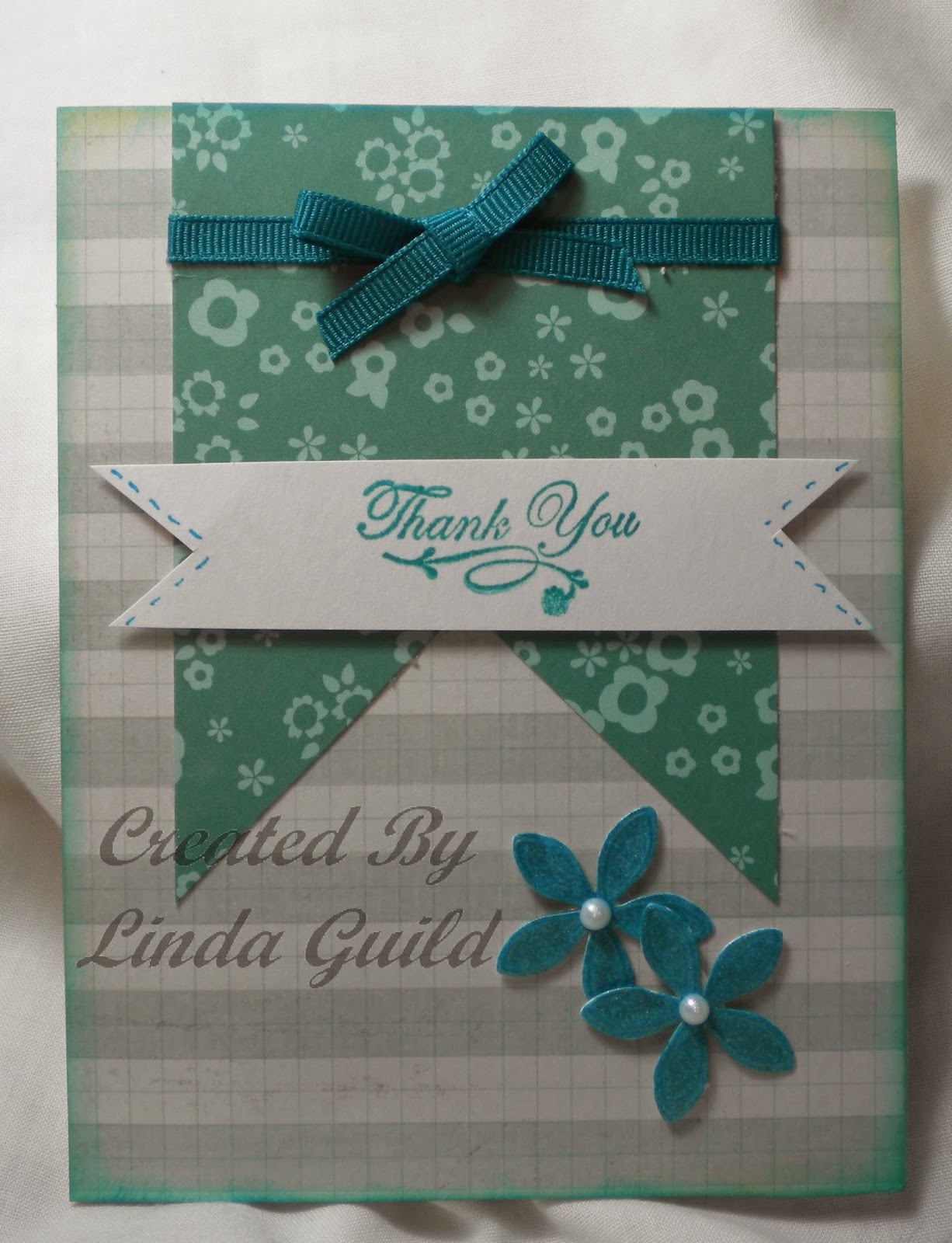 The colors don't show up well in the photo.  They truly do match! lol!  As soon as the Pearl Pen dots dry on the flowers, I'll jot a note inside and get it sent off.
Posted by Linda at 1:07 PM 3 comments: