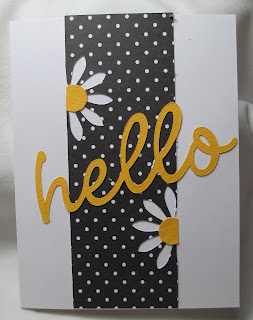 The sentiment is CluffHmkBold font, cut with my Cameo.
Posted by Linda at 9:38 PM No comments: 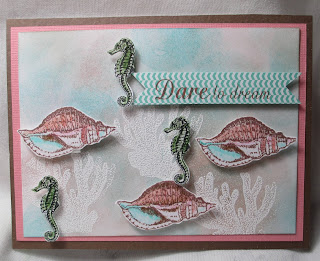 Whenever I'm inking a background I tend to leave the colors too muted.  I'm still struggling with color!

I used four different inks on the background and really thought it would be more vibrant.  The final card looks fine but it's not what I was aiming for at all.

The sea horses are clip art images that I did a print/cut with my Cameo and colored with pencils.

The shells are from a stamp set and also colored with pencils.

The coral is embossed with white.

I printed the sentiment on my computer and pop dotted everything for dimension.
Posted by Linda at 6:12 PM No comments: 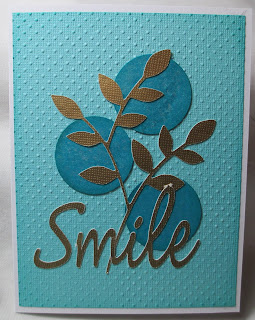 The leaves and stem shape is a Poppystamps Lorelai Leaf die shape.

I used CliffHmkBold font and Make the Cut for the word.

The 1 3/8" circles were punched from a piece of turquoise cardstock, sprayed with Glimmer Mist and the edges inked with Bermuda Bay ink.

This was inspired by a card seen on a blog from the UK.
Posted by Linda at 1:46 PM No comments: 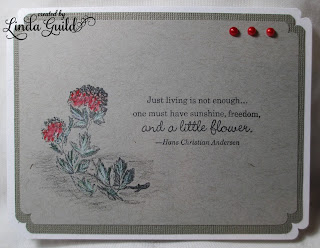 I'd almost forgotten that I had purchased some Prismacolor pencils a few years back.  It was when I first began card making and before experimenting with water based and alcohol based markers.

At the time, the "in" thing was to use mineral spirits and either Q-tips or blender stumps to shade images.  Once I was introduced to Promarkers, the pencils got put away and forgotten.

There was a short video posted on Facebook recently with instructions on using colored pencils to shade stamped images that already had the shadows incorporated in the image. I decided to give it a try. 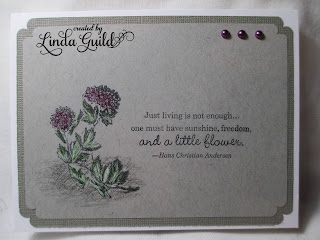 It's been several weeks since any cards have been made around here.  It's the middle of tax season and I put in some long hours until it ends.  Most days by the time I get home from the office I'm too tired to even think about doing any crafting!

Using the pencils adds just enough color to the image to make it stand out.  I used a Strathmore toned gray sketch book for the base and mounted it onto some Bazzil gray cardstock.

I like the effect the pencils give to the image.  It's more delicate than using a marker and takes only a few seconds to complete.