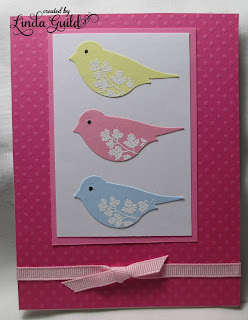 Stampin' Up bird builder punch was used for the embossed birds.

Another card that is quick to assemble making it perfect for multiples.  There is ample room at the bottom to add a sentiment. 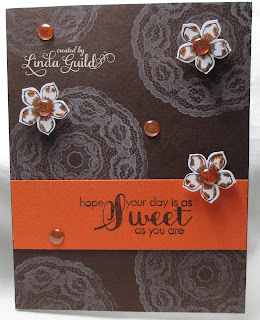 Another card inspired by one seen online.  I used Stampin' Up Whisper White ink on the background.

The flowers were done with Petite Petals stamps and punch.  The centers were colored with Stampin' Up markers and topped with an adhesive gem.

The sentiment stamp came with a card making magazine from the U.K.
Posted by Linda at 8:16 PM No comments: 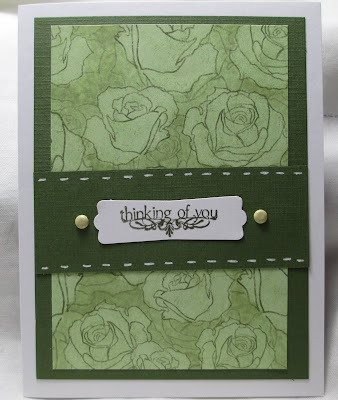 I captioned this as a 30 minute card but you can make multiples in that length of time.
Posted by Linda at 6:15 PM No comments: 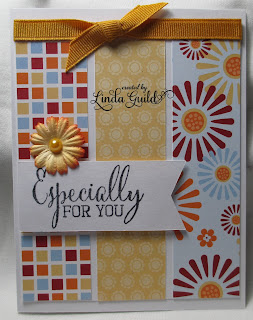 A super easy, quick card that's a good way to use up scraps of designer paper.

I used my Cameo to cut the base for the sentiment and added a paper flower with a pearl for the center.
Posted by Linda at 2:47 PM No comments: 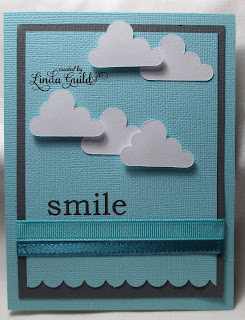 This card was inspired by one seen on a Stampin' Up blog from the U.K.

I used a cloud file done by Bird and my Cameo and printed the sentiment using my computer.

A scalloped edge punch was used on the bottom edge using a dark grey ink to match the bottom mat.
Posted by Linda at 10:55 AM No comments:

Many times when you buy a large stack of paper you wind up with what I call photo printed sheets.  They're reproductions of actual items like the rocks on this card front.  One good way to use them up is to do a play on words to fit the image.

The sentiment is a combination of stamp sets, mounted on stacked punched circles and pop dotted for dimension. 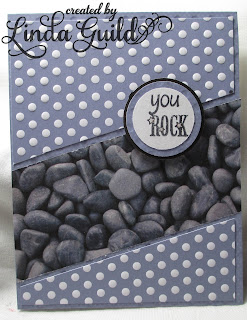 I was inspired by a card seen online.

It seems like forever since any new cards have been posted on here.  It's been a rough July for me; not feeling well at all, and just now feeling up to doing some crafting again.

The rose die used on this came with a card making magazine from the UK.

The background on the card appears to be embossed in the photo but it's actually white on white die cuts of the rose itself. Two of the roses are glued onto the center rectangle and the top one was pop dotted for dimension.

It took quite a while to get the die cuts done and assembled.  There are a total of 14 die cuts on the card front.  Now I remember why I bought an electronic cutter! 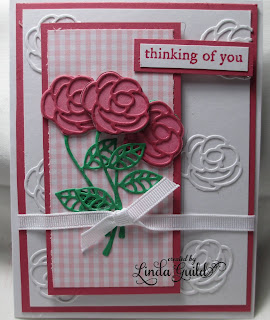 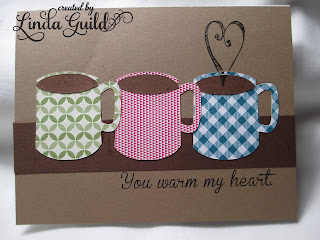 The mugs were traced and cut using Make The Cut software.  The heart was done by inking only a portion of a stamp I've had for years.

The sentiment was printed on my computer.

This should have been a 30 Minute Card, but Suddenlink internet service went off!  All together I spent about 2 hours to complete four of these since I couldn't get online to find a clip art image to trace!
Posted by Linda at 4:32 PM No comments: 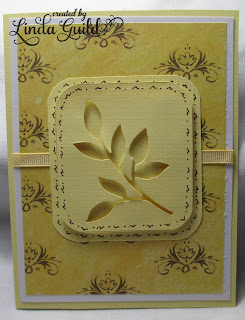 Sizzix Little Leaves die was used for the branch.  It's pop dotted for dimension.  Pen stitching was done around the outer edge of the die cut layer.  This is a blank note card. 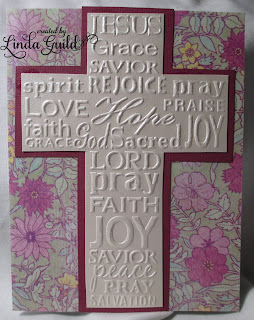 The embossing was done with a Darice folder named Cross With Script.  I found it at JoAnn's.   It's embossed on mica paper and mounted on some cardstock. 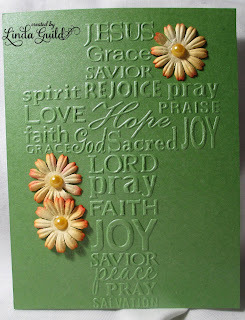 I really like the embossing folder.  It will be easy to cut the embossed design into sections and use them as card sentiments.
Posted by Linda at 2:06 PM No comments: