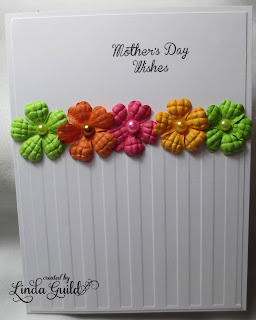 The sentiment is computer generated.  I embossed the bottom section with a Cuttlebug folder then added five paper flowers with adhesive pearl centers.

Butterfly Card With Window And Vines 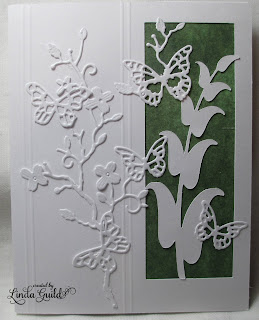 Using MTC, I cut the rectangle and vine in the white card base.  The butterflies and the rest of the plants are a Memory Box die.

The die was cut several times then I cut it into segments and glued them onto the card front.

There are four embossed lines for a little added texture.
Posted by Linda at 7:11 PM 2 comments: 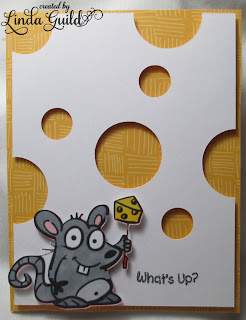 This card was totally CASED from one seen on Splitcoast Stampers.

I used MTC to cut the holes for the cheese and used Silhouette software to print and cut the mouse image.  It was colored with Promarkers.  The mouse is from Your Next Stamps Quirky Animals stamp set.
Posted by Linda at 4:02 PM No comments: 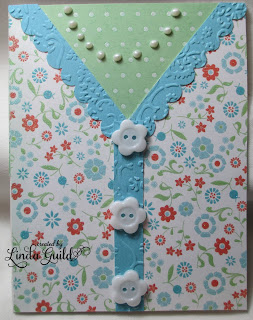 This card was inspired by one I found while doing a Google search for Mother's Day card ideas.

I cut a piece of copy paper the same size as the card front and drew a "V" shape in it to determine the angle and size for the neck opening.  This was used as a template to mark the back side of the floral cardstock and cut it out.

The lacy collar was done with a Stampin' Up border punch and cut to 1/2" wide.  The placket is also 1/2' wide.  I embossed the blue cardstock to give it a more lacy look for the collar and placket.

Looking back at the papers I chose makes me wish I'd chosen something other than mini-dots for the bottom layer.  Once the card front was assembled, I decided the large open "V" was too plain and added a Pearl Pen dot necklace.  Dots on dots!

The flower shaped buttons are from the Dollar Tree.  I was wandering around the store and discovered them on the aisle with the automotive stuff!  They were no where near their craft supply area. 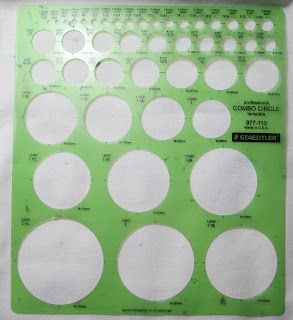 This template is really handy to have around.  It gets used a lot to decide what size circle punch to use for a particular stamp or to draw an arc.  It was found at Hobby Lobby in the area with drafting and art supplies.  I have two of these.  Once has circles from 3 1/2" down to 1 1/2" and this one has 2 1.4" down to 1/16".

I used it to create the arc shape for the Pearl Pen dots in the necklace. 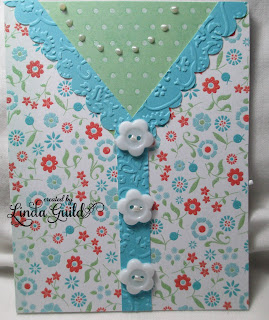 There was a comment left on Facebook after I posted this card in a card making group with the suggestion to add thread to the buttons.

They had already been adhered to the card so, instead, I used a Pearl Pen and just added a faux thread across from side to side.  It does improve the appearance of the buttons and I didn't have to fight to get thread looped though them!
Posted by Linda at 12:18 PM 3 comments: 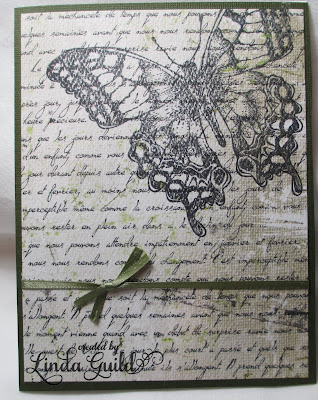 Sometimes the most simple card turns out to be one I really like.

I used some scraps of paper with script print and just picked up the olive color with the background paper and ribbon.

The butterfly is by Tim Holtz.
Posted by Linda at 7:48 PM No comments: 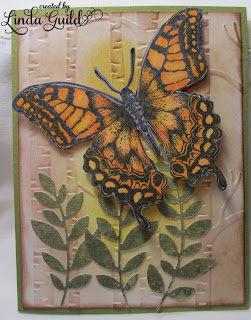 Today I'm playing with all the new supplies that arrived last week.

The birch tree embossing folder is from Stampin' Up; the butterfly is a Tim Holtz stamp that I colored with Promarkers; the greenery was die cut. 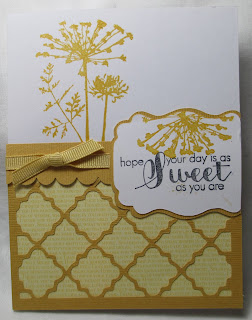 This afternoon I traced and cut a quatrafoil background image.  It measures 5 1/2 x 4 1/4" so it will completely cover an A2 card front.

The stamp is from Inkadinkado.  I used Crushed Curry ink.

The sentiment stamp came with a card making magazine published in the UK.

This card was inspired by one seen on Pinterest.

This is a shout out for Scrapbook Outlet .  These are the goodies I ordered from them that arrived today. 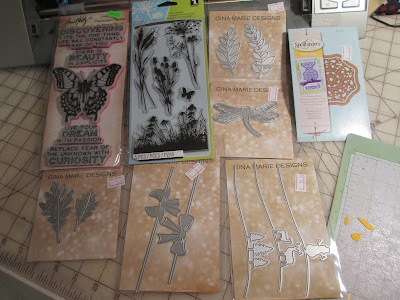 They had the lowest prices I've found on dies and stamps.  The large butterfly set by Tim Holtz was less than $5.   I had never seen the bow and winter scene dies before.  The bow die will come in really handy for card making.  I may have to do a little shading on it with a Promarker to add some dimension but I won't have to worry about it getting mashed in the envelope.
Posted by Linda at 6:43 PM 1 comment: