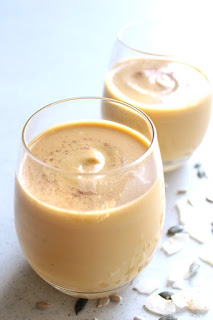 Put all ingredients into blender and process until smooth.

Yes, I know, according to Weight Watchers you're supposed to count fruit if you  blend it into a smoothie.  I choose not to since I'm not packing a blender full of several servings.  Pumpkin puree is zero points on Freestyle and using just 1/2 cup of almond milk is less than one point.

Since the breakfast fruit pizzas turned out well, I experimented with making some sweet rolls using the basic dough recipe.

I rolled mine up jelly roll style and cooked it in a single piece.  It took too long to bake all the way through so next time, I'll just fold it in half to bake.

1 egg white, whipped to a froth

Combine first 6 ingredients to make a soft dough.
Spray two pieces of waxed paper with Pam.  Put dough on one sheet
and cover with second sheet.
Roll dough out until it’s about 1/8” thick.
Combine cream cheese, Truvia and jelly.
Spread onto rolled out dough.
Roll up jelly roll style, or just fold in half.
Place on aluminum foil sprayed with Pam.
Brush with egg white wash.
Bake at 350° 20 minutes or until done.

This morning at a cooking demonstration sponsored by the Seminole Nation, these were prepared and we got to sample them.  They use the two ingredient dough that's been so popular with our Weight Watcher group, but it was made with flavored non-fat Greek yogurt rather than the plain.  I decided to experiment with their original recipe and tweak it a little to make it more "points friendly" for Weight Watchers.

This is the recipe, as prepared;  my version follows.

I used two types of Truvia: the baking formula and the regular.  I'm sure either one would work fine.

The total points for the entire recipe is 15 based on the ingredients I used.
4 Smart Points per pizza

Combine flour, baking powder and salt.  Add Greek yogurt, vanilla and baking Truvia
mix well to form soft dough.  Divide into 4 portions.  Pat out into a 3-4” circle.
Preheat a non stick skillet and cook circles until browned and completely done.
Set aside.
In saucepan, cook fruit, regular Truvia, and cornstarch until thickened.  The frozen fruit will release some juice so you may not need to add any additional water.
In a small bowl, mix the Greek cream cheese, regular Truvia, cinnamon and orange zest.
Top each of the pizzas with 2 T. of the cream cheese mixture and fruit.