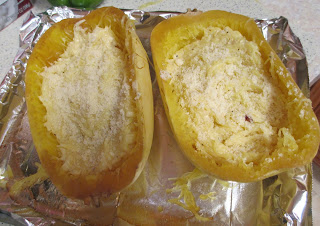 *****Edited to add:  I photographed this before I topped each with the bacon bits*****


Cut the squash in half, scoop out seeds, place cut side down in a shallow baking dish.  Add ½ cup of water to the dish.  Bake, uncovered, in a 400° oven until tender—about 35-40 minutes.


When squash is done, use a fork to remove the “spaghetti”.  Mix with the cheese wedges and cream until cheese is melted and creamy.


Add salt and pepper to taste.


Scoop the squash mixture back into the empty shells.  Top each half with 1 tsp. of Parmesan cheese and 1 T. bacon bits.

This is my version of a recipe shared by Michelle Reiber on a Weight Watcher Facebook page.  I used regular half and half, Kraft grated Parmesan, since that's what I had on hand, and Hormel real bacon bits.

Be careful when you're cutting the squash in half!  The squash is really hard.  I used my large chef's knife and nested the squash in a kitchen towel to keep it steady.

I scooped the center out into a mesh colander that I'd lined with paper towels.  This absorbs the excess water.  The cheese wedges and half and half were warmed in the microwave before I added the squash to the mixture.

It's been a really long time since I'd baked a spaghetti squash.  As I remember, I tried to substitute it for pasta with spaghetti sauce on it and I did not like it that way.  The combination of cheeses and cream makes this version taste almost like Alfredo sauce.  Fettuccine Alfredo is my favorite dish to order, and it's probably the most fat laden, high calorie item on the menu.  Now I can satisfy myself with this instead.  I could eat the entire squash and still use fewer Smart Points than just a few bites of traditional Alfredo sauce.
Posted by Linda at 2:44 PM No comments:

With having just two people to cook for, I rarely bake cornbread.  Instead, I mix it up and fry it up like a pancake.  It takes a lot less time and there's no need to heat up the oven.

Tonight I measured all the ingredients so I could calculate the Smart Points per serving for the Weight Watchers plan. 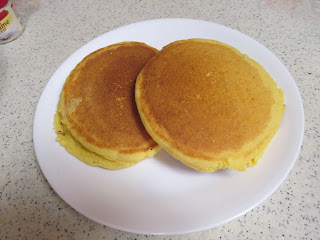 Mix thoroughly.  I spooned the batter into a non-stick skillet and made 4 generous corn cakes about 3 1/2 inches in diameter.    Brown on one side, then turn and cook until done.

I used Shawnee Mills yellow cornmeal and all purpose flour to calculate the points.

Total 22.5 points so I rounded the count up to 6 per cake 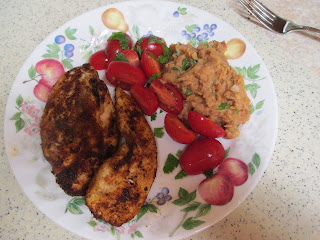 ***This has too much cumin for my taste and I will omit the sugar next time I prepare it.***

Recipe is from Weight Watchers 15 Minute Recipes
Posted by Linda at 7:44 PM 1 comment: