Not Too Bad Biscuits -- 4 Smart Points

This recipe surprised me.  First, because it's supposed to make six biscuits and second, because the biscuits are really pretty good.

If you roll the dough out and only make six biscuit, they're going to be huge.  I divided the dough in half, cut six small rounds and topped a chicken pot pie with them. 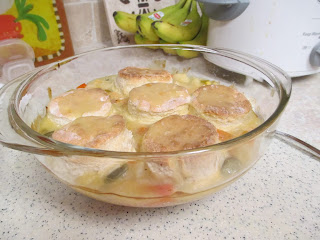 The other half of the dough was rolled out and cut into four biscuits.  I baked them in my counter top convection oven.  They came out nicely browned and fluffy inside.  Since there's no added fat, the outer crust is tougher than a traditional biscuit.


NOT TOO BAD BISCUITS
Makes 6 – 4 Smart Points each

To make the chicken pot pie I used one can of Veg-All, one 9.75 oz. can grilled Swanson chicken breast, one .87 oz. package of McCormick chicken gravy mix.  I drained the Veg-All and chicken, reserved the liquid to mix with the gravy mix packet.  Combined the gravy mix, vegetables and chicken, topped with six biscuits and baked until biscuits were browned.  Using only half of the dough (12 points) makes these biscuits only 2 points each.